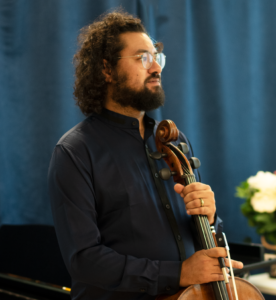 In 2008 Mr. Martins was appointed principal cello at São Paulo University Chamber Orchestra, during this time he had the opportunity to perform with respected musicians such as Leo Brower (Classical guitarist), Tim Fain (Philip Glass’s violinist), Kirk Trevor ( conductor), and many more.

In 2013 Mr. Martins was featured as the Soloist with the Guarulhos orchestra after being awarded the first prize in the Soloist Competition 2013.

With a full scholarship in 2015, Mr. Jefferson moved to California to study with Doctor Marek Szpakiewicz at Azusa Pacific University.
Since his residency in California, Mr. Martins has performed with renowned orchestras such as Irvine Symphony, Santa Monica Symphony, and Los Angeles Sinfonietta. Mr. Martins has also participated for three consecutive years in the Bach Week, a joined festival for students from APU, USC, UCLA, and CSULB under the tutelage of Prof. Midori Goto and Dr. Szpakiewicz.

Currently, Mr. Martins continues to perform in LA, Irvine, and Riverside areas while passionately educating at Vienna music institute, he has a Cello Studio Class in which students have the opportunity to improve their performance and training for auditions and competitions towards their levels